Every year, the language teachers at Metis arrange trips for their students to countries and cities relevant to their study programme. Here they can experience the culture and practice the language.

Metis plan a new programme for language student excursions, starting autumn 2020. The students of French go to Nice, German to Berlin and Spanish to Valencia. The one-week programme includes language classes and cultural activities. The students stay with host families.

17-22 November 2019 the students of Spanish went to Barcelona and stayed with host families. A lot of fun; they experienced both language and dance classes, tapas and a guided tour in Barcelona. 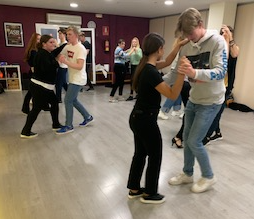 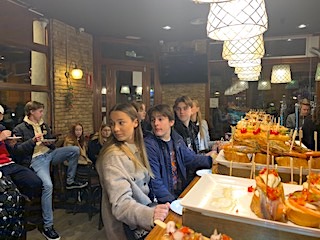 The final year students together with their teachers Anbjørg Igland (English) and Monica Amundsen (Chemistry) on a study trip to London 11/3-14/3 2019.

The Chemistry class went on a day-trip to visit the University of Portsmouth, south England. They got a guided tour round campus and they learned about the British higher education system and the life as a university student. They visited the Dental Academy, School of Biological Science, the Faculty of Technology and School of Mathematics and Physics. The following day in London, they visited the Royal Institution of Great Britain (Ri). The institution was founded in 1799 and is an organization, which aims to inform the public about research within the field of science. They were given a guided tour in the buildings, the museum and archives.

British history and politics are important elements in the curriculum of English Social Studies. Brexit as a central part of British politics, has dominated the international media lately. As part of the Erasmus+ project (MOLTAM), the students were assigned to make e-books about the British governmental system, including a Brexit report. In relations to the assignment, they visited Westminster, the Houses of Parliament in London. They had to line up outside the historical building and go through a thorough security check before they were allowed into Westminster Hall and St Stephens´Hal. Having the right contacts, they managed to enter the House of Commons to attend the Brexit debate. To make the video report, they interviewed people who were gathered outside Westminster to protest against Brexit.

Students of German and French went to Switzerland last autumn. They went to French speaking Geneva and German speaking Bern. In Geneva they visted the UN-building; the Red Cross Museum and the chef museum Patek Philippe. The visit to Bern, included the Albert Einstein Museum and a guided town walk, where they among many things saw the 500 year old Zytglogge bell tower.

The trip was enlightening for both students and teacher.

Are foreign languages something you would consider? Not only useful when travelling abroad but also an advantage in many professions.

At Metis Upper Secondary school you can study the following languages: